Home > The Embassy > News > Minister for the Armed Forces Florence Parly in Singapore for the (...)

Florence Parly, French Minister for the Armed Forces, was in Singapore on June 2 and 3 to participate in the Shangri-La Dialogue, an international conference dedicated to security and defense in Asia.

Organized in Singapore from June 1-3 by the London-based think tank International Institute for Strategic Studies (IISS), the annual Shangri-La Dialogue brought together ministers, military authorities and private actors related to the defense from over 50 countries.

With nearly 1.5 million national citizens, 9 million square km of EEZ and 200 000 French expatriates, France is a recognized actor in the Indo-Pacific region. As such, on 2 and 3 June 2018, the French Minister for the Armed Forces, Florence Parly, attended the Shangri-La Dialogue and gave a speech at the Fifth Plenary Session on "Raising the Bar for Regional Security Cooperation". Minister underscored France’s stances on nuclear proliferation, more specifically regarding the situation in the Korean peninsula, the fight against terrorism and the respect of international maritime law. The Minister said that cooperation and multilateralism are the only way to address these three challenges in the Indo-Pacific area.

The Minister met with Ng Eng Hen, Singapore’s Defense Minister. Defense cooperation is a strong pillar of the bilateral collaboration between France and Singapore. Minister Parly also had bilateral meetings with her counterparts from Australia, South Korea, Indonesia, Japan, Malaysia, Thailand and Vietnam. 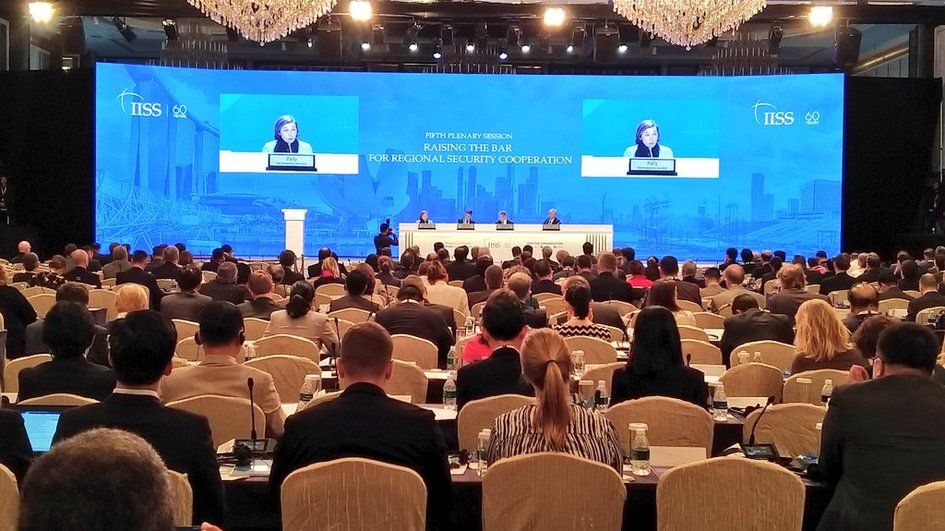 Download the full speech by French Minister for the Armed Forces, Florence Parly at the Fifth Plenary Session of the Shangri-La Dialogue.