Previously located at 5 Gallop Road, the French Embassy has, since September 1999, moved to 101-103 Cluny Park Road, opposite the Botanic Gardens. This new building houses all the departments of the French Embassy.

The architectural firm, Dubus-Richez designed the building, after winning the competition launched by the French Ministry of Foreign Affairs in 1993. The building’s outstanding features have earned it an award from the Singapore Institute of Architects.

To emphasise a “certain French state of mind”, glass and aluminium have been used for the external facade, with wood, stone and leather for the interior. 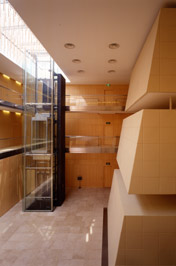 The building comprises two staggered blocks with white aluminium panels outlined with prominent steel side extensions. The metal has been used for its capacity to withstand the equatorial climate. The rest of the structure is in stainless steel. The two juxtaposed forms create an entrance and landing where dignitaries are received.

The offices occupy three floors and the public area is an open atrium with a sunroof. A transparent glass lift and passageways along the walls allow for the free movement of personnel and visitors. A monochrome of soft colours and the choice of materials used - the yellow of the stone for the floor, the sycamore panels and the beige leather - contribute to the serene ambience of the lobby.

The diplomatic chancellery offices are lined with wooden panels. The furniture in the Ambassador’s office is designed by Philippe Soffiotti, a young French designer.