Rear-Admiral Ronnie Tay, Singaporian Chief of Navy, has made an official visit to France from 21 to 24 November 2006 at the invitation of Admiral Oudot de Dainville, Chief of Staff of the French Navy.

Accompanied by a delegation of three officers, Rear Admiral Tay has mostly visited sea rescue operations and the training of combat units at sea. At this occasion, the delegation also visited Toulon and has made a short cruise on board the "Mistral", one of the newest ships of the French Navy used as force projection and command unit. 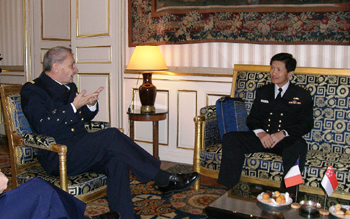