Ms Brigitte Girardin, Minister delegate for Cooperation, Development and Francophony, made a trip to Singapore on 17 and 18 September to attend the World Bank and International Monetary Fund meetings.

She represented France in the Development Committee (of which the exact title is: Joint Ministerial Advisory Committee of World Bank and IMF governors on the transfer of actual resources to developing countries).

Speech of Ms Brigitte Girardin on the occasion of the Development Committee meeting on the World Bank’s strategy towards countries with intermediate revenue.

"I support, to a large extent, the diagnosis that was proposed, but would like to recall three fundamental principles that should guide us. The first principle is to reconcile the points of action raised in the report, with the preservation of the role of the Bank in the developing world (...) The second principle is the selectivity which consist in reinforcing the Bank’s mission most importantly in domains in which it has a comparative advantage to the other fund baillers.(...) The third is that the Bank must stay vigilant, in its dialogue with countries of intermediate revenue, on the impact of the two principles on the poorest countries." 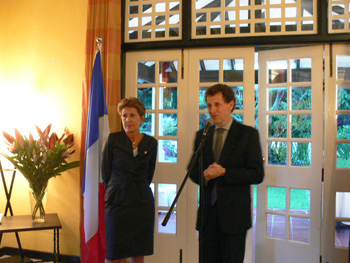 Speech of Ms Brigitte Girardin on the strategy of governance and the World Bank’s fight against corruption (Singapore, 18 September 2006)

"In all, France salutes the progress accomplished by the Bank in the preparation of this strategy. It would be appropriate, henceforth, to finalise it in order for it to be approved before the end of 2006 by the advisory committee, that should be associated closely with its implementation."

Speech of Ms Brigitte Girardin during breakfast on the occasion of the presentation of an international work group report on the world (Singapore, 18 September 2006)

"Public infrastructure involves all countries and therefore this strategy requires an internationally coordinated effort. It is important therefore to "concentrate", according to the expression used in the report, a political impulse capable of picking out important priorities and general direction. From this viewpoint, France shares the report’s idea that world governance must be improved. On our part, we count on working with our Swedish partners in the coming months, in order to identify ways that are most suitable for providing this necessary political impulse."