The defence relations between France and Singapore benefit from both countries’ authorities wish to strengthen a privileged partnership. They are structured around common values, close dialogue, progressive cooperation and shared operational experience (Afghanistan, Gulf of Aden).

Several defence agreements encompassing this relation which rests on an annual strategic dialogue and committees of staff and regular armement. In addition, the visits by the military authorities and by delegations in France and in Singapore are maintained at a high pace. Our cooperation is especially demonstrated by the port of call of ships and by exchanges in experience and regular common drills. Several significant areas are note-worthy :

A detachment of the Singaporean Air Force is based in Cazaux since 1998 for the training of fighter pilots.

France has appointed a liaison officer to the Information Fusion Center (IFC) of the Singapore navy since the creation of the center, which is dedicated to regional maritime security, in 2009.

Singapore is one of the primary bilateral partners of France in terms of cooperation on defence technologies, where both states have a level of sound investment.

In terms of acquisition, plans such as those to purchase frigates of high grade in 2008 reinforce this partnership. 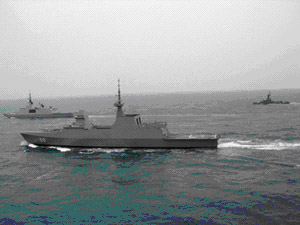 The General Directorate for Armements (DGA) aims to :

Prepare for the future : anticipate threats and risks, prepare technological and industrial capacity, within a european framework (17 % of studies are carried out through european cooperation).

Promote exports of armement : major sector of French industrial policy for the control aspect of France’s international engagements as well as the economic aspect of the development of defence enterprises (1/3 of the activity of French companies in the industry in the past ten years).

For further information, please click on the armaments portal