Home > The Embassy > News > France bestows the Order of Arts and Letters upon Mrs Rosa Daniel and Ms (...)

On 16 January 2020, Ambassador of France to Singapore Mr Marc Abensour bestowed the Order of Arts and Letters upon Ministry of Culture, Community and Youth Deputy Secretary (Culture) and National Arts Council CEO Mrs Rosa Daniel and National Gallery Singapore CEO Ms Chong Siak Ching to acknowledge their outstanding contributions which have strengthened the cultural ties between France and Singapore.

The excellent and longstanding cultural relationships between France and Singapore took a step further today with the conferment of the Order of Arts and Letters by the French government to the leaders of two Singaporean cultural institutions. 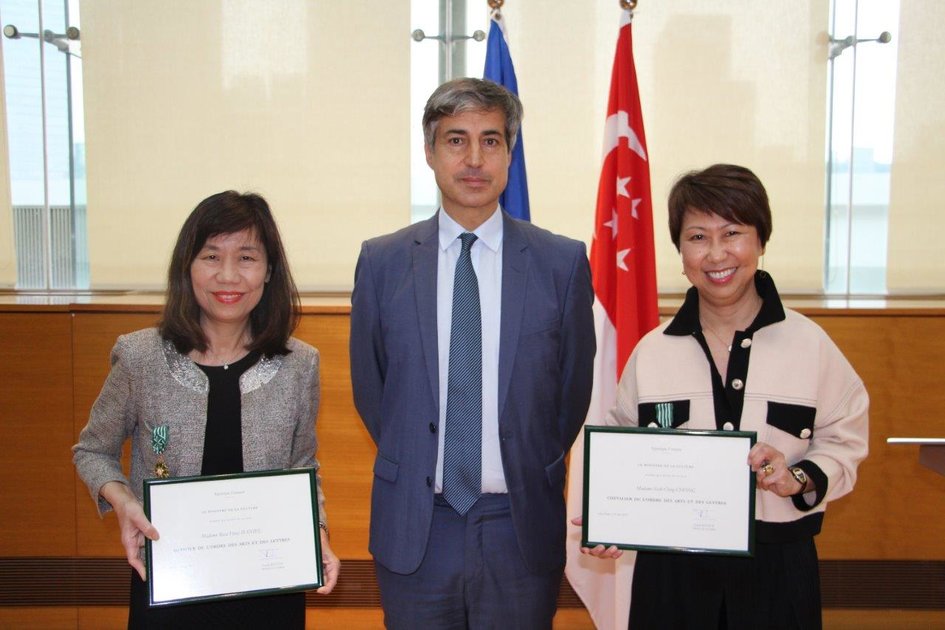 On behalf of the French Minister of Culture, Ambassador of France to Singapore, His Excellency Mr. Marc Abensour, bestowed the awards upon Mrs. Rosa Daniel and Ms. Chong Siak Ching at a ceremony held at National Gallery Singapore on 16 January 2020.

With these decorations, France wishes to acknowledge the outstanding contributions made by Mrs. Rosa Daniel and Ms. Chong Siak Ching, which have strengthened the cultural ties between the two countries.

France and Singapore have enjoyed a strong and deep cultural relationship since 2009 with the signing of the Agreement on Cultural Cooperation by both Governments. This provided for diverse and extensive exchanges, exhibitions and significant programmes such as the Singapour en France – le Festival in 2015, and the annual Voilah! France Singapore Festival. Building on this foundation, a Cooperation Agreement on Enhancing Cultural Cooperation was signed in Paris on 12 November 2019 by Singapore’s Minister for Culture, Community and Youth Ms. Grace Fu and France’s Minister for Culture Mr. Franck Riester. This agreement expands on the scope of the 2009 Agreement, including in the areas of technology, research, creative enterprise and capability development.

Since 2012, Mrs Rosa Daniel has led Singaporean cultural institutions to present Singaporean arts and heritage to French audiences, notably culminating in the Singapour en France – le Festival in 2015, which extensively profiled Singapore’s visual, performing and literary arts in Paris and other key cities such as Lille, Lyon, Nantes and Toulouse. More recently, Mrs. Daniel was actively involved in the organisation of the Malraux Seminar in March 2018. Held in Singapore, this high-level meeting brought together major French and Singapore cultural institutions, policy-makers and practitioners to discuss new trends and innovations in the arts and culture sector. Mrs. Daniel also worked closely with French counterparts to ensure the successful conclusion of the 2019 Agreement.

Ms. Chong Siak Ching continues to lead National Gallery Singapore in its ambitious international cooperation strategy with leading French and global museums. A cooperative agreement was signed between the Gallery and the Centre Pompidou which laid the groundwork for two major exhibitions in both countries: Reframing Modernism: Painting from Southeast Asia, Europe and Beyond presented at National Gallery Singapore in 2016, and Latiff Mohidin: Pago Pago (1960–1969) held at the Centre Pompidou in 2018. The latter marked the Gallery’s first foray into presenting a travelling show on Southeast Asian art and marked a watershed moment in the Gallery’s curatorial mission of enabling a greater understanding of Southeast Asian art internationally, by showcasing the oeuvre of one of Asia’s leading modernists alongside his Western peers. In 2017, National Gallery Singapore also staged Colours of Impressionism: Masterpieces from the Musée d’Orsay, which featured a selection of world-renowned impressionist paintings.

The growing partnership between France and Singapore since the 2009 Agreement will continue to receive support, with the broadened scope of the 2019 Agreement. Going forward, the long running Voilah! France Singapore Festival will be reimagined as a platform to showcase and celebrate the results of strong collaborations in various disciplines beyond the realm of arts and culture. Focussing on collaboration, co-production and partnership, the new mission of Voilah! allows Singaporeans to take a joint ownership of the festival, and use shared knowledge and expertise to create new and innovative experiences for all communities to enjoy. Both countries are also committed to exploring more projects that will support efforts to enrich our respective arts and cultural scenes, and develop capabilities among our cultural and creative practitioners.

Ambassador of France to Singapore, Mr. Marc Abensour said, “I am very honoured today to bestow these awards upon two major partners and friends of France. Their works and actions have tremendously helped to deepen the cultural collaboration between our two countries over the past few years. France is looking forward to further cooperation with Singapore in forefront cultural areas such as digital innovation and creative industries thanks to the new agreement inked by our Ministries of Culture.”

Deputy Secretary (Culture) of MCCY and CEO of NAC, Mrs. Rosa Daniel said, “Our deep cultural ties over the past decade have provided a firm foundation to go further in expanding our collaborations to key areas of arts excellence, technology, research and capability development. Our strong linkages at both institutional and people-to-people levels will continue to enrich our respective arts scenes, and foster a greater mutual understanding of our respective cultural heritage. I accept this award on behalf of all my colleagues in the culture sector as we continue on this journey where our cultural activities contribute towards the strong bilateral ties of both countries.”

Chief Executive Officer of National Gallery Singapore, Ms Chong Siak Ching said, “I am honoured to be conferred this award, and accept it on behalf of all my colleagues at National Gallery Singapore and in the visual arts sector. By working with our esteemed French counterparts, we have been able to connect our respective artists and audiences with each other. This synergistic and mutually enriching relationship is one we celebrate, and one we look forward to further cultivating.”

France’s Order of Arts and Letters was established in 1957 to recognise eminent artists, writers, culture practitioners and policy makers, as well as people who have contributed significantly to furthering the arts in France and throughout the world. The Order is made up of three ranks – Chevalier (Knight), Officier (Officer), Commandeur (Commander).