Home > The Embassy > News > Conversation with François Bujon de l’Estang on the first year of the Trump (...) 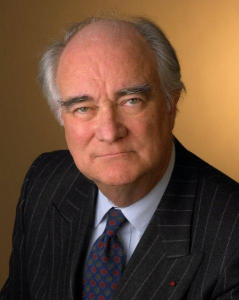 As a former Ambassador of France to the United States (1995-2002) and long-time observer and analyst of American politics and foreign policy, Mr François Bujon de l’Estang will share his views on the first year of the Trump administration, taking stock of its first actions and explaining what they suggest for the remainder of Mr Trump’s term, especially of U.S. foreign policy in Asia and Europe.

Attendees will benefit from the analysis of an experienced diplomat and analyst on international issues, particularly American political life and foreign policy, and to discuss, in particular, his perception of the recent political evolution of the United-States and its impact on foreign policy in Asia and Europe.

Mr François Bujon de l’Estang joined the French Foreign Service in 1966 and was General de Gaulle’s deputy Diplomatic Advisor until 1969. He then served in Washington, London and Vienna. In 1982, M. Bujon de l’Estang was appointed president and CEO of Washington D.C. Cogema, the world’s largest nuclear fuel-cycle company. Prime Minister’s Diplomatic and Defense Advisor (1986-1988), M. Bujon de l’Estang was then appointed ambassador of France to Canada (1989-1991) and then to the United States (1995-2002). Retired from the Foreign Service, he joined Citigroup as Chairman of Citi France (2003-2010). President of FBE International Consultants, a company he created in 1992, M. Bujon de l’Estang is a member of the International Advisory Board of Total, a member of the Executive Committee and president of the French group of the Trilateral Commission, and is Vice-Chairman of the French-American Foundation (U.S.) and director of the French-American Foundation (France).